I have been taking some time to actually "work" these last few days and my house can prove it! I also want to spend a little time on here-keeping Asia's journal for her. I can clean when the kids go back to school right??

"Asia" moments. Found her trying to make "toast", several slices and her hands in the toaster-AHH! Seriously and thankfully it was unplugged. I was also doing dishes, you know how you'll take dirty dishes out of the sink and set them on the side to load into the dishwasher...she walked up and drank out of one of them-and said "mmmm". In horror I looked in the cup and ya, I should have be terrified. A thick sludge was in the bottom of the cup, I can't even think about it anymore. She isn't sick though....

It's impossible, let me emphasize "impossible" to paint Asia's finger nails. She always wants it done and I rarely do it because I know it will be a enormous mess. It has been awhile since I tried so I thought we could. Maybe she has the ability to sit still longer or have more patience, I was thinking optimistically:)  I asked her what color she wanted a couple of days ago, and she said "blue". WHAT? Blue? First of all she knows the word "blue"? Does she really like "blue" or is it a word she knows? I have always told her that her favorite color was purple because I didn't know! I will say blue now:) So I got the blue out and she shook her head yes-awesome right?! One of those moments that was amazing to me and to anyone else it would have been so normal. So we tried, complete failure. I did one of her hands, tried to use a blow dryer and hold her hands down so it could dry. Still a mess. Yesterday I went to the store actually looking for quick dry polish, I wish there was a "healthier" alternative but this was not going to work with out it. I also got a quick dry spray. I was determined to do this for her. For some reason, the "blue" took waaaayyy longer to dry and she grabbed the polish brush with her hands and wouldn't let it go, needless to say it was everywhere. But, it was a lot better with the quick dry polish! She only got two blue nails though. I will have to do it when she is asleep. 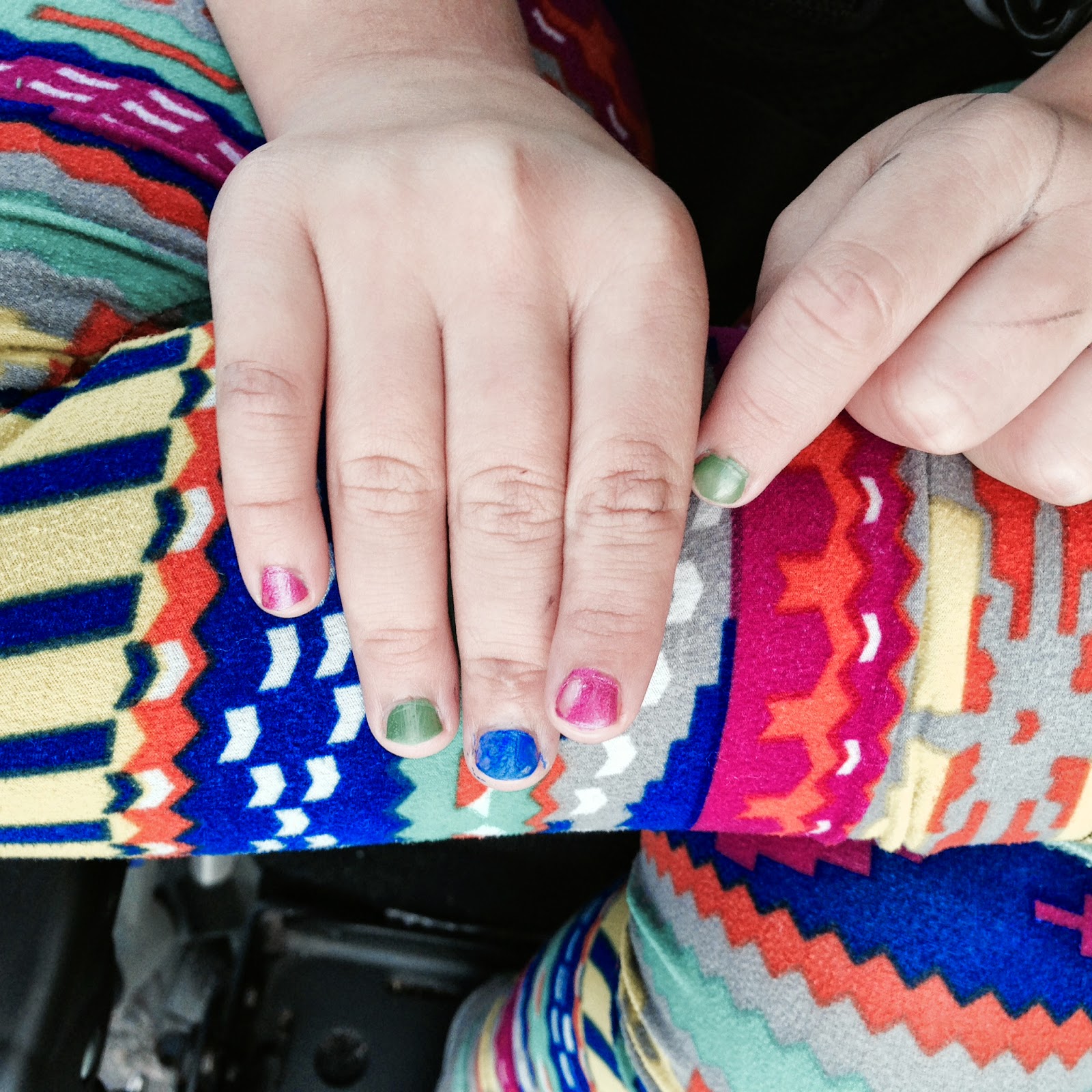 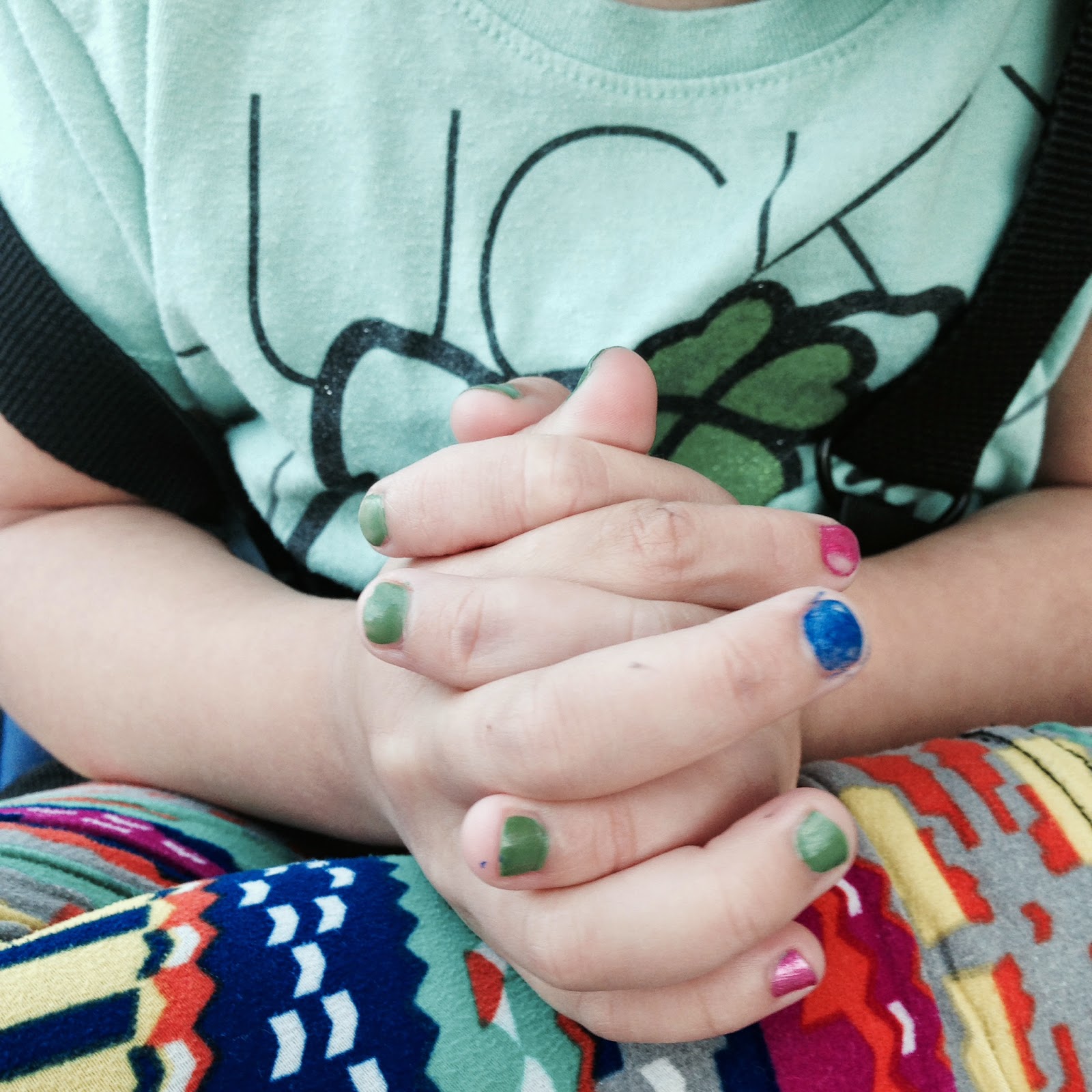 Asia had a EEG yesterday. Asia actually likes going to the doctor. She asks to go to the doctor sometimes and I wonder if she really doesn't feel good or if she just wants to go. There is no question that when she goes to PCMC she gets spoiled, I think she expects blankets, toys, books etc. now when she goes. So grateful for all of the staff and volunteers that have made this a good experience for her. Asia, her Dad and I got a 30 minute nap after a series of strobe lights in her face. I couldn't watch-they give me migraines. I hope we got what we needed, I will update on results! 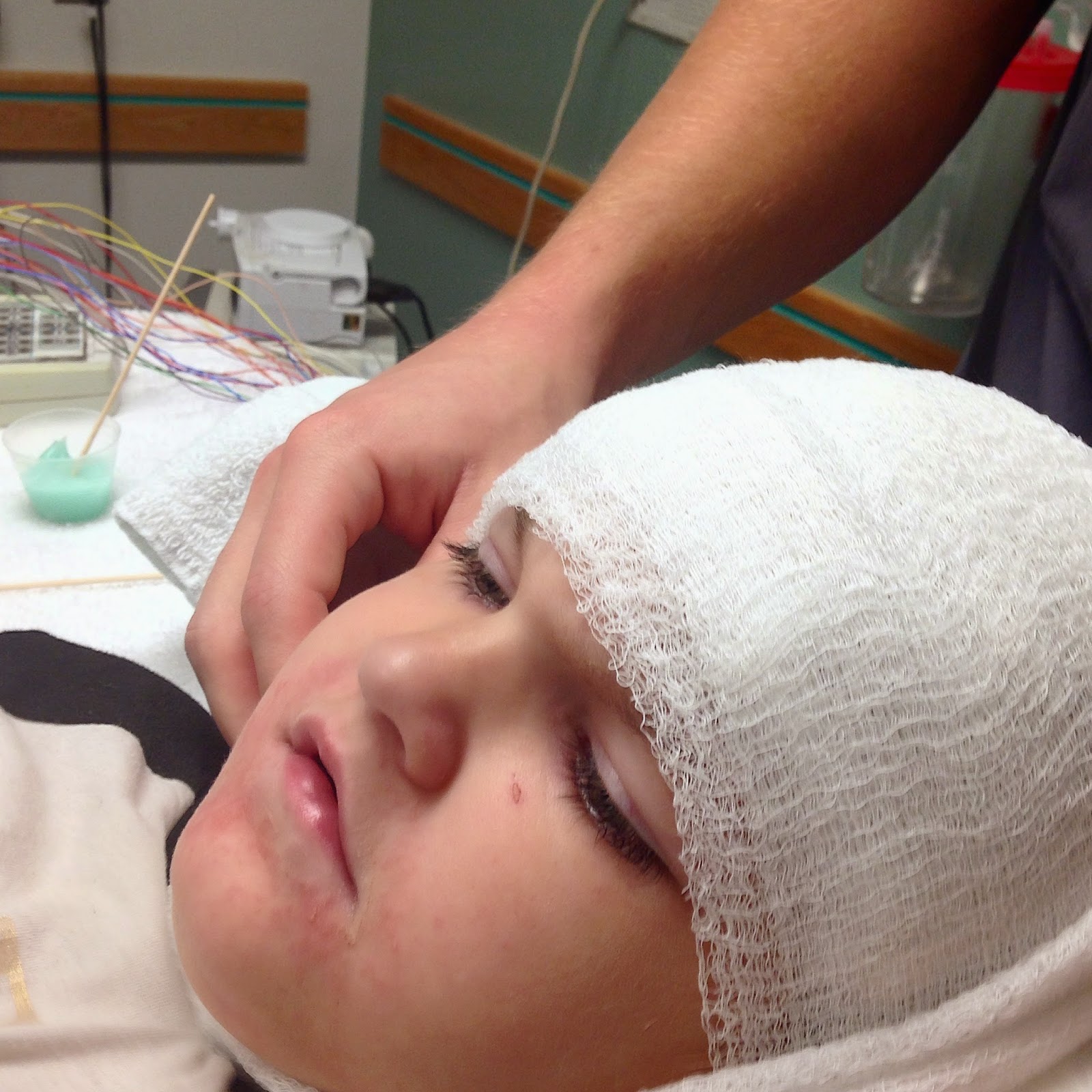 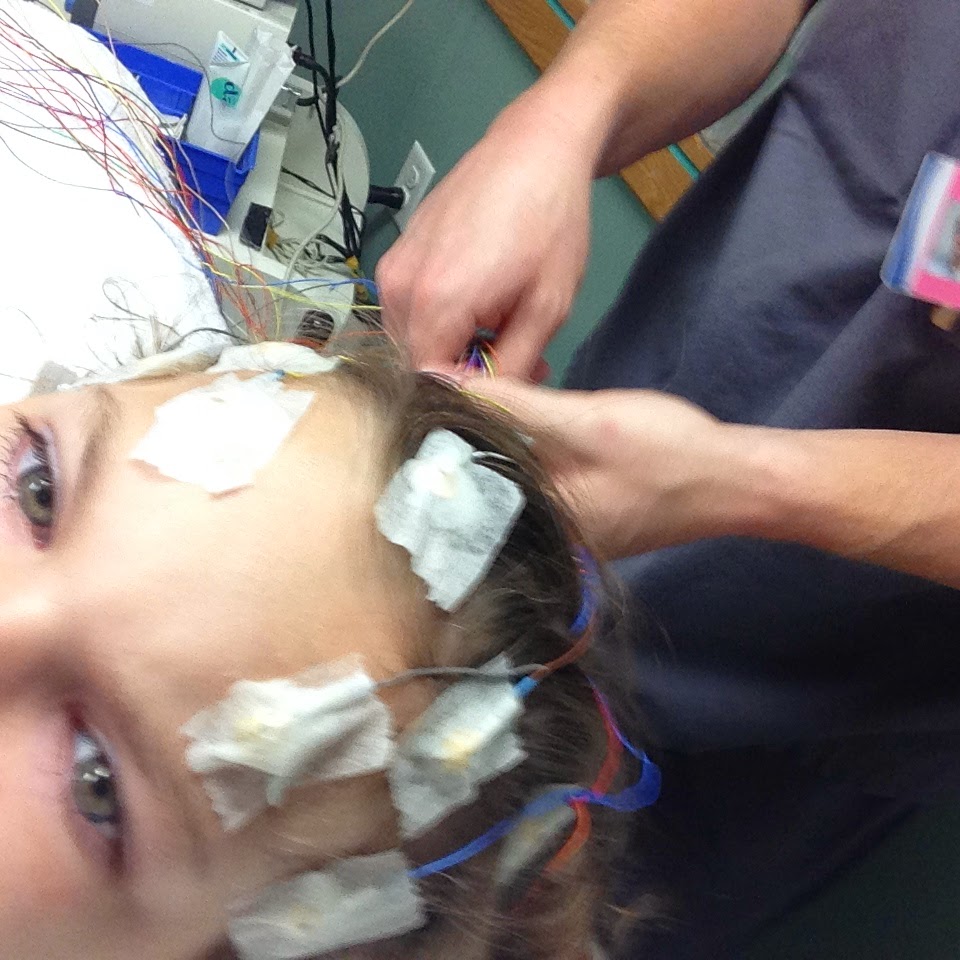 We told her she was getting her hair done-it worked. I am positive she would have ripped them off though if I wasn't holding her hands. New adorable blanket! She was given a choice and she picked it-I love the decision making! 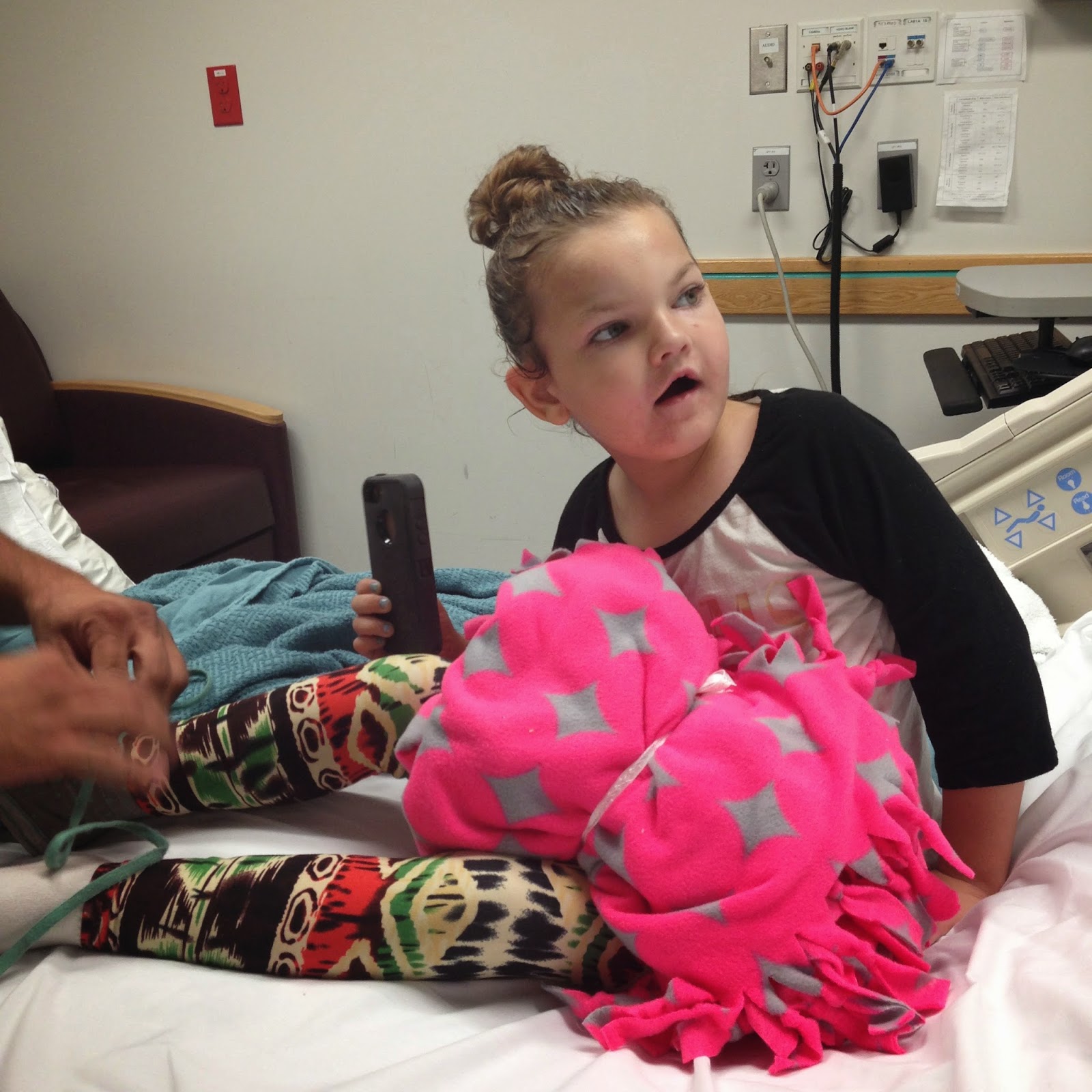 Hair after we were done-love the style:) 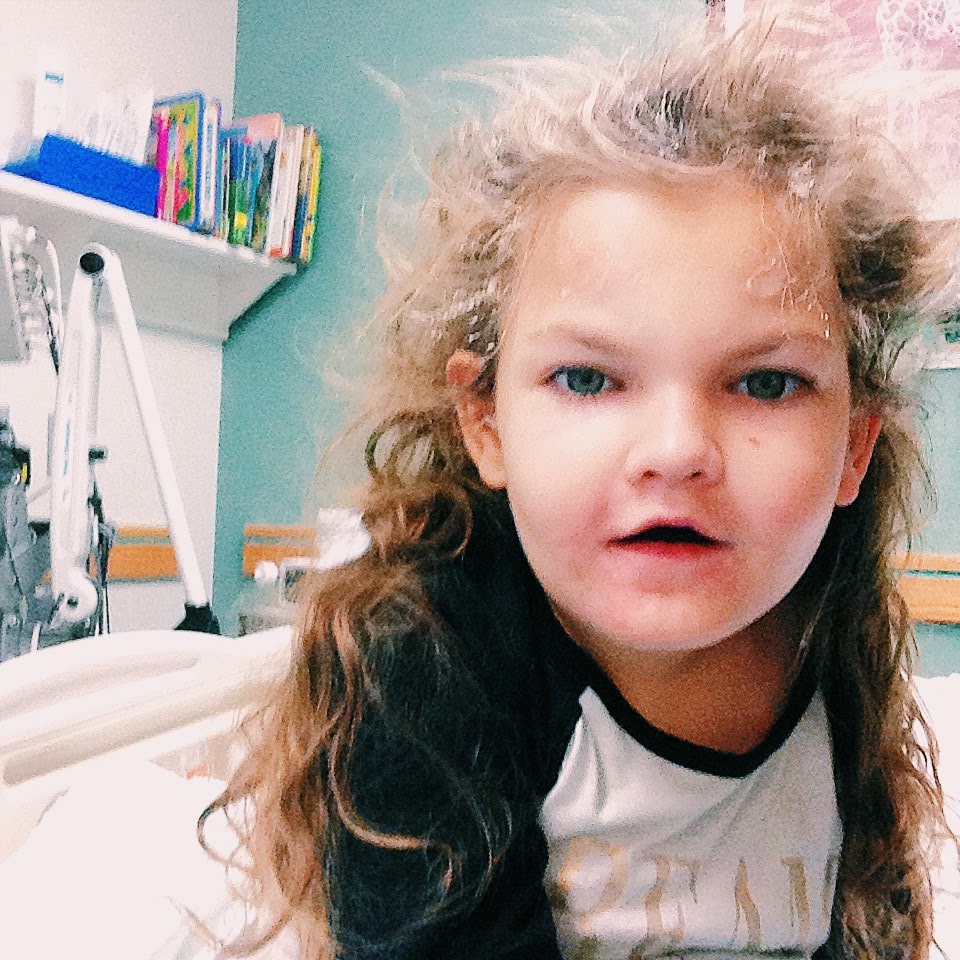 I had the CUTEST moment with her when we were eating afterward-she even picked a blueberry muffin out to eat and ate it. She was offered bites of our food but she didn't want them. Sometimes I think we forget that she really does have a mind of her own. Asia is so amazing when we are one on one-I think she enjoys it as much as we do. She is well behaved, engaged and has so much fun. Anyway, she was trying to tell me something. I was trying SO hard to figure it out, it probably took me 5 minutes of throwing out words. She would look at me in the eyes and say a word that could have sounded like "doctor", "closet" etc. and I just couldn't get it. Finally, I looked at her in the eyes and said "oh", with a smile on my face and I said "chips". She started laughing and threw her arms around my neck and gave me the biggest hug, I don't think it was because she was going to get chips I think it was because I figured it out-and "duh" I should have guessed that word in the beginning. She was so excited about it-happy that I "got" it, and I did get her some chips:) 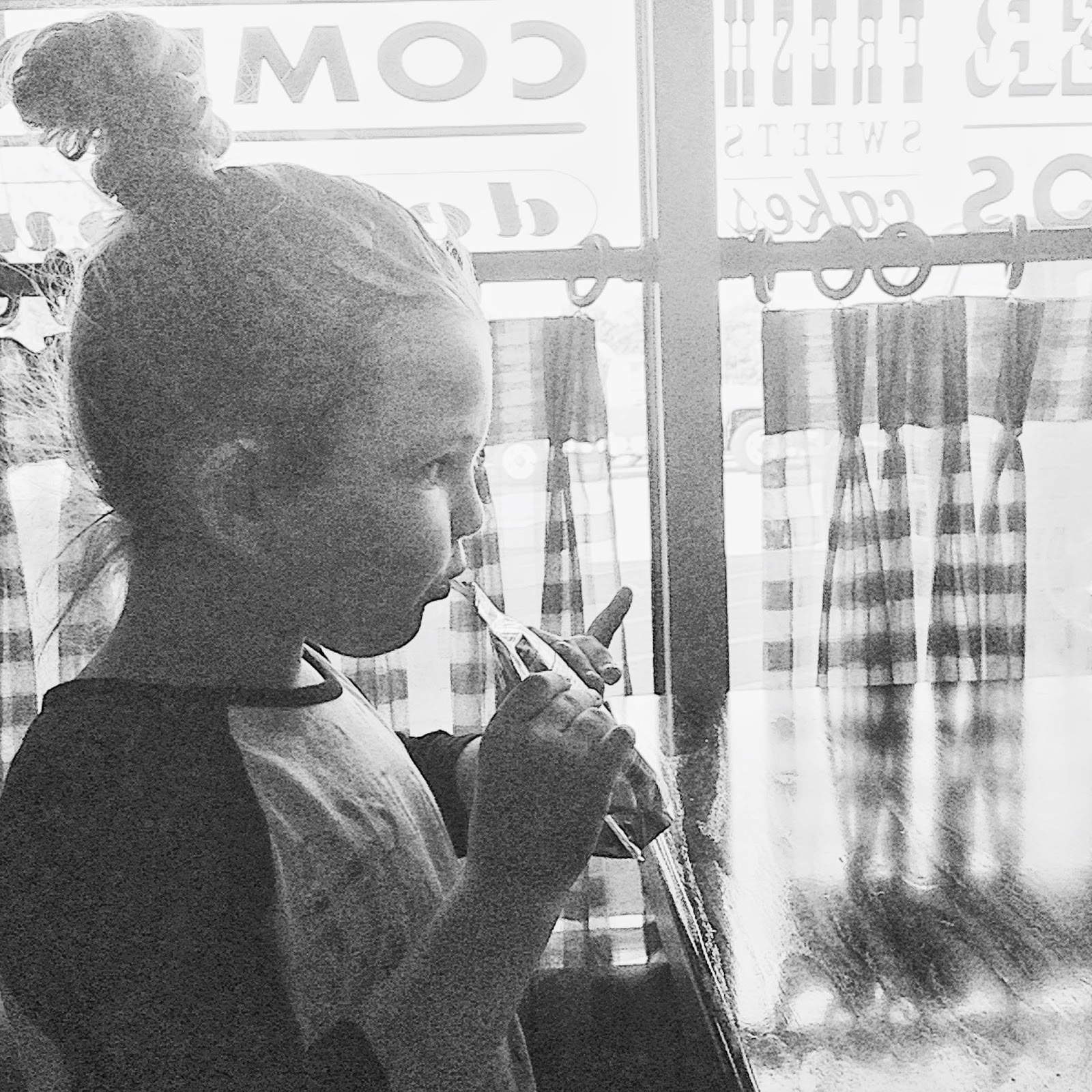 Posted by Season Atwater at 1:31 PM