I love summer! I am already getting a little sad about it ending even though we have a couple months to go:) Asia loves to hang out on our patio with a pen, her books, iPad and Costco ads:) I love this picture of her that I took on my phone. I got it when she gave me a split second of calmness and actually looked towards me. Poor thing is off lately. Not eating well and having some longer seizures. I am not sure what is going on. She has had some good tantrums but I am pretty sure it's the seizures making her feel weird. She doesn't do well in heat but I have been doing well at keeping her cool and always forcing the water. The only thing I don't like about summer is that I often have sunglasses on and when she slaps me in the face she hits my glasses and it really hurts:) I am over getting slapped:) She finally settled into her Summer school routine and seems to be doing well there. 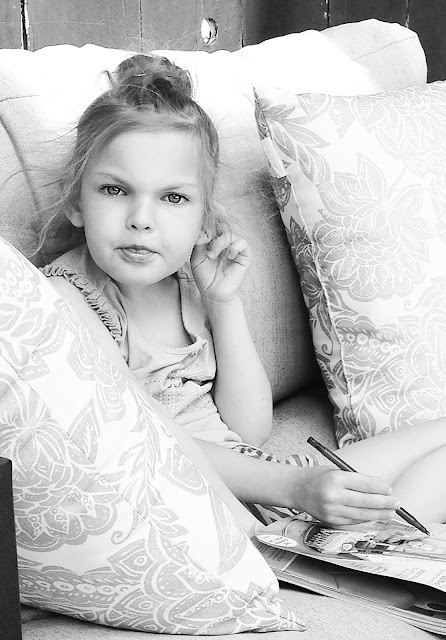 We went a saw her pediatrician yesterday because I have been so concerned about her eating. Asia has lost almost 2 pounds over the last couple of months-she is so tiny! Her Dr. wasn't to concerned yet-he thought she still looked "good".  He king of ruled out reflux or food sensitivities. She will only take a couple bites at each meal-and she does this while gagging and choking! The most food she gets right now is when I force her because she has got to take her vitamins and seizure medication. This is usually mixed with a yogurt or applesauce and I have been giving her extra just so she will have eaten more. (This is just a FYI but my pediatrician said that if you are having a hard time with your child taking the medication you can mix it with cool whip and it goes down really well. I don't do a lot of cool whip but, if she was eating really well and not handling the meds I may consider it.) She is leery every time I  try to feed her, especially with a spoon-she must think it's medication. Even the foods I had "down" for her like avocado's, yams, etc. she wont eat! I wouldn't be so concerned but with her health situation I really think she needs a good balanced diet. I question her seizure medication as well....I know there are x amount of people taking it but one of hers is Depakote and I have been seeing it in the news lately-argh!  So, he (Dr.) has recommended some food therapy-probably done by her speech therapist right now. He thinks it is more of a behavioral issue, which is probably is. Because she has a hard time with texture and chewing-I think the thought of choking probably stresses her out as well, she would rather not eat. A couple of years ago Asia was in the hospital for seizures that wouldn't stop, seizing every 5 seconds for a week and she quit eating and drinking. It was very hard to feed her because you would get a bite in and she would have a seizure and choke.  He recommended maybe "thickening" her foods-one way would be with a ripe banana. This is a great recommendation for kids who choke a lot. We did this in the hospital during that time and it helped so much. They performed a test on her that kind of x-rayed her swallowing and just a little bit of liquid would go down the wrong side of her throat every time she swallowed making her choke. She seemed to have more control with thicker liquids. We used a thickening agent at that time (which was recalled because of serious side effects, seriously) but there are other ones out there-I would check the ingredients if it is not a "natural" form. It is so hard to know what is going on with her because there is no indication of not feeling well or is it merely attitude:) I'll keep trying-may try the banana thing...and keep you updated.
Posted by Season Atwater at 8:37 PM