One of my wishes for Asia is that she can be happy and have fun in life. I don't want this to sound like I am too jealous but, I see Asia's cousins, classmates and friends running around-playing, having so much fun as children and I feel so bad that Asia can't participate. I will admit that it really brings me to tears sometimes. It's heartbreaking to me. This last weekend I decided to try an outing with Asia. I knew it could be difficult but was hoping that if I got really dressed up and dressed her up like it was "Halloween" maybe she would have a good time... 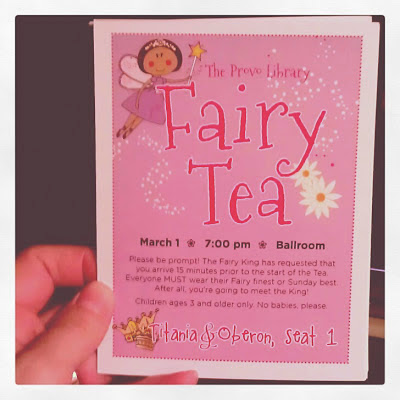 She was super grumpy about getting dressed to go-threw some good tantrums.
Didn't want to wear her "tiara", or wings and wanted to be carried. 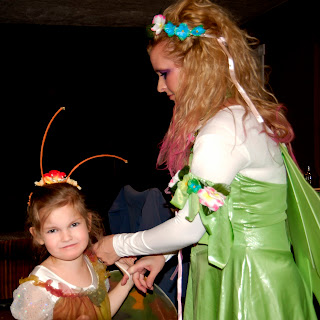 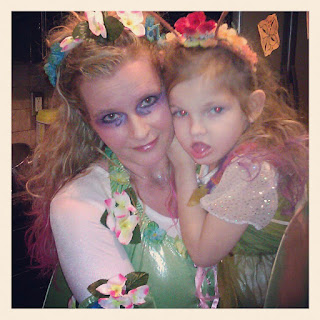 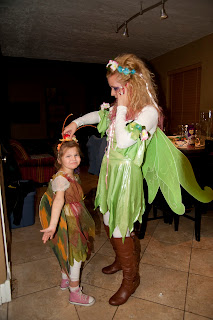 She perked up when she realized one of her favorite cousin's was going with us and driving in our car-that was exciting for her:) 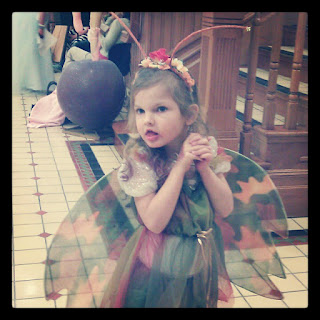 By the time we got to our destination she had been chewing on her hair-purple hair that is (I chalked the ends with purple color bug) she had purple all over her face and shirt-oh fun! I should have known better, lol. When we got there she was doing pretty good-tons of excitement in the air, lots of little girls (and big girls) dressed up in fairy costumes running around-then she saw the elevator. All she wanted to do is ride in the elevator and started getting grumpy that we weren't getting in it. 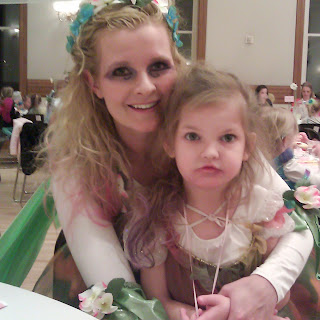 Then we went to the ballroom and the program started-it is intended for kids 3yrs and older. Asia's developmentally around age 3yrs (kinda guessing at that). The beginning of the program is silent-dead silent-except for Asia. She finds her high pitched grumpy shrill because she is upset (probably about the elevators) and starts kicking trying to grab stuff.  I had to hold her hands down so she couldn't throw anything. The Fairy King spoke and beautiful ballerina's danced-again it was so quiet except for Asia. I was getting embarrassed but what can you do? It is what it is:) I couldn't let her go and sit with all the other little girls-she was too naughty and I know she would have ripped someones costume or she would have hit and pulled hair-I was beginning to wonder what I was thinking even coming to the event. A lady at a table next to us kept looking back but I didn't dare look at her. I didn't want to know if she was just curious or annoyed. It didn't matter. We were served some food and what do you know-a little "tillamook cheese" just for Asia:) So excited.

I was second guessing myself about taking Asia up to meet the Fairy King. I almost didn't go. I didn't know if she could sit next to him without being grumpy-she loved it! Finally-she cheered up a bit. She called him "anta"-thought he was Santa and he was so great! 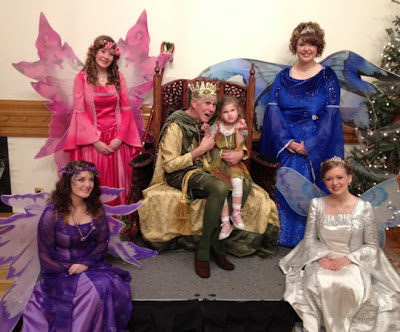 After the program I took Asia back to the Fairy King. He talked to her a bit and asked her name. She kept saying "anta" and checking out his costume. She really enjoyed that-yay! 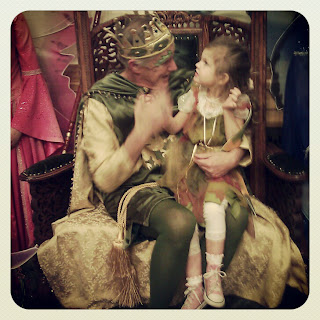 Was it worth it? Yes, and I say that because the next morning she wanted to wear her tiara and fairy wings. To me that meant she enjoyed herself even if she didn't act that way most of the time. We got to spend time with cousins, eating and dressing up. We may just try again next year.
~Yesterday, I had a neighbor tell me that the Fairy King remembered Asia after it was over. He heard her in the audience and he was glad I brought her to meet him and that he got to spend a little extra time with her. I heard that he knows it is hard for mom's with special needs kids to bring them to events like this and hoped she had a good time. This remark really touched me, especially when I found out who the Fairy King was:)  It is very difficult to bring her to events-and I mean very. This remark has encouraged me to try more with her-to suffer through it because she may actually be enjoying herself-I just don't know it. She needs great childhood memories too~.