I am setting aside the cleaning and work right now to post this message. I feel like I received a huge blessing-this post will be a little lengthy but please read the end results:) Someone shared some information with me and I want to spread the word. This is VERY important because it affects so many children. I am almost sick that I did not have this info a few years ago!

Asia has suffered with constipation since she was little. I don't remember her having to many issues before she was 1yr old but, I remember it becoming a problem after that. Not sure why, it may be her low muscle tone or something directly related with the missing info from Chromosome 2. Asia along with other 2q kids have a hard time with potty training and severe constipation problems. We have tried everything-with diet, we tried taking her off of corn, dairy and gluten (didn't see any results). When Asia was small (up until a couple of years ago) she would eat ANYTHING:) At that time she definitely got her daily dose of vegetables and fruit. For constipation we would give her prune juice and additional fiber to try to get her to go and none of it worked. With Asia, it seems as though her constipation problems directly affected how frequent and severe her seizures were so we definitely wanted to get it under control. 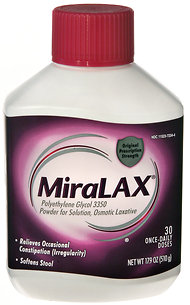 We were soon introduced to Miralax. In fact, I remember sitting in a waiting room with a GI doctor and she told us her daughter had constipation issues and she just gave her a dose everyday and it kept her regular. We inquired with Asia's Dr and were given prescriptions to get her Miralax-even though you can buy it over the counter some insurance will cover the cost of it. I can not remember the exact date but it has been at least a few years since she started taking it-maybe longer. It worked great-we were so relieved to have something. If she missed a day she wouldn't go. Along with being miserable, she would have increased seizure activity so it was important she got it everyday. With in the last couple of years Asia's personality has changed. She is extremely aggressive, lethargic, terrible mood swings, her Autistic characteristics seemed to be amplified. You may have read from previous posts about her erratic behavior. At home on the weekends all she wants to do is lay in bed-took several naps a day, just miserable. I recall bringing her in to the Dr.'s office last year because she looked like death-so sick, no energy, limp, pale, lethargic, expecting there to be a ear infection or something and nope, couldn't find anything wrong. I sat there and said to her (Dr.) "look at her, somethings wrong".  I didn't know what to do. Then I got this report on Miralax-and all I can think right now is are you freakin kidding me!! I encourage you to read the full articles for all info-what it is actually made of and all the effects.  Here are just a couple excerpts and my main concerns:

In some situations, metabolic acidosis can be a mild, chronic condition; however, it may lead to shock or death in severe cases. Neuropsychiatric adverse events may include seizures, tremors, tics, headache, anxiety, lethargy, sedation, aggression, rages, obsessive-compulsive behaviors including repetitive chewing and sucking, paranoia and mood swings. (this is Asia, I've seen it all except the "tics" & not sure about the "tremors")

Technically, PEG is an osmotic laxative. Because of this property, it blocks the absorption of nutrients in the small intestine. Its extended use may result in severe malnutrition-related disorders, particularly in young children and older adults. Autism is one such disorder. It may take only two weeks of an acute iron or iodine deficiency to cause autism in a child younger than two. (Asia has a  slight iron deficiency right now)

Safety and effectiveness [of PEG] in pediatric patients has not been established.”
Administration back in 1999 only for use by adults, and for no longer than 7 days. In spite of this clear and unambiguous rule, pediatricians routinely prescribe PEG-containing laxatives to children of all ages [8] anyway. Equally disturbing, many doctors encourage adults and children alike to take them indefinitely, even though the label clearly states: “Use no more than 7 days.”

“I’ve had kids on it daily for years,” said Dr. Scott W. Cohen, a pediatrician in Beverly Hills, Calif., adding that he will generally refer them to a specialist in prolonged cases. For children with chronic constipation who are not being helped by dietary changes, “We literally give it like water.”

The problem is-no one knows what this does to children. The research hasn't been done. When you  look at the Miralax label it does say "do not use more then 7 days"-for adults and kids over 17.  Children are being given adult doses of this product indefinitely. I brought this up with Asia's pediatrician and he had not heard anything. In fact, he tried to look it up on the web and couldn't find anything. I did send this info to him and I would be curious to see what he thinks. The following links are full of information-please read them. In the article on the first line it gives you links to many other articles.

So-after all of that:) I never would have suspected Miralax to be the cause of so many of Asia's issues.  I took Asia off of Miralax almost two weeks ago...I am substituting for now with some digestive enzymes and they are currently doing the trick but, I don't know how long that will last. I hate the thought of having to deal with the pain of constipation again but, I will never give her Miralax again. It feels like I was poisoning her. I don't know how I can completely describe her change but, she is a COMPLETELY different person-and I am getting emotional right now even typing this. If I didn't see it I wouldn't believe it, night & day difference. Two days later I remember telling my husband in bewilderment-Asia just said this or just did this. She is herself again, she teases, she plays, she is bringing back words she used to say, she is eating better, she has more energy, she has a kindness again, a calmness and clarity. This happened with in 2 days-it was like a miracle. I have been holding back on this post because I didn't think it was actually happening. Don't get me wrong-she still has her tired and frustrated "tantrums"-but she doesn't have the rage and aggression that she did. I don't feel abused anymore:) Even when she is extremely frustrated she refrains from hitting and hair pulling like she was. She doesn't want to spend all day in bed! She gets up and makes a mess:) Gets in to stuff:)  Everyone has noticed a difference in her-even before I tell them this story. She has been getting notes from school saying-"She was so happy today!" Her teacher commented that "I got Asia to sit and concentrate on work today?!" and "She ate great". 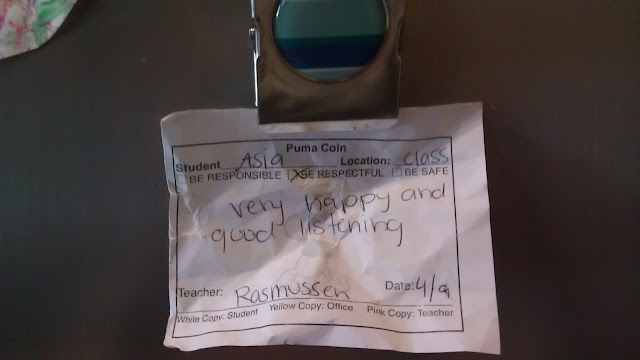 I just wanted to do my share and "Spread the Word" because so many little ones are in the same situation and we really don't know the long/short term effects. Whats this product going to do to them in another 15yrs? It has never been approved by the FDA for pediatric use. Look at the labels because there are other brands made with the same ingredient -polyethylene glycol. I will be curious to see how this will effect her seizures and I hope that there is no permanent damage....
Posted by Season Atwater at 8:14 PM