I am busiest in the Spring and Fall with my job so my posts are lacking but, I wanted to get down just a few things that have been happening...Asia has started additional Speech and PT appointments and I have been taking her out of school for that. Right now "life skills" are more imperative then other areas. She had a speech therapy evaluation and I think right now we are going to work on teaching a little bit in sign language. This should be a adventure for the whole family because we will all have to learn. She surprised me and I think her therapist, when he was showing her pictures to "say" and she busted out with a perfectly clear "Apple"-it was awesome to hear that! Asia wants to use her hands a lot so I think sign may be a good direction to take.

Physical therapy is going well and a lot of that has to do with that special bike they have. She has now added "bike" to her prayers at night:) When Asia says prayers at night it is really just a list of all the things she is "thankful" for- Bus, Elmo, Mall, Gma's house, McDonald's and now Bike-really cute. 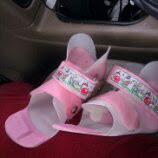 A couple of years ago Asia had some "daffo's" ankle/foot braces made because we thought it would help with her balance and to support her ankles that seemed to be pronating. It didn't seem like they were doing much so the PT suggested we had them cut down-now they are just a sole insert and they seem great. We got her some new high tops that fit the insert and support her ankle. A lot of shoes have the option to remove the sole insert which makes a little bit more room for braces. I would never have thought to have them cut. They were so expensive to begin with but, I guess if we weren't using them anyway it doesn't matter.

The title of this blog-chips, cheese and sometimes marshmallows-use to describe her fav's in food but I have to say I have seen a change in that. Which is fine with me:) She doesn't eat cheese or chips very much and not really any desire for marshmallows even as a offered treat. She has been a very picky eater-which makes trying to figure out what is going to be best for her digestion really hard. I am trying to convert her to smoothies and applesauce (instead of her fav yogurt) but this has been really hard. I'll keep at it.

Sleepless nights and less napping are here again. I think Miralax put Asia into such a lethargy that she wanted to sleep all the time. Now that she has been off of it she is up at night again. Not every night and not all night but def a lot more often. Temporarily to get some sleep I will bring her her iPad and she will watch it for hours. This is something else I need to work on but I wouldn't trade this for "Lethargy":)

School is still great-still getting good notes from teachers and I am so pleased with that. In fact, tomorrow is "Special Olympics" day. I hate that Asia can not tell me what she does during the day at school:( I know they do so many great things there and I never know/hear about it-that's a bummer.

**I have had so many people tell me about their Miralax experiences and ask what we are using for Asia that I am going to post about that. It is honestly baffling how many people are struggling with digestive problems! There is def something wrong with our diets. I did receive a return phone call from Asia's pediatrician about the articles I forward to him concerning Miralax and this is what he told me. He actually had the hospital pharmacy along with himself searching for information regarding these side-effects and he didn't come up with much info. He did say -which I have as well- that everyone could have a different reaction to it. He suggested that I write a letter to the FDA regarding my experience with Asia and gave me a couple of ideas I could try with her. I think that writing a letter is a great idea and to all of you who have mentioned problems with your children and Miralax to do the same. Maybe some one will take note and do some testing:) I will let you know that a few of my conversations with others have included their children having seizures while on it-wow, scary. That is just not right.**